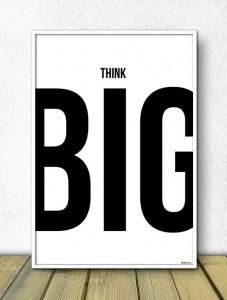 That’s right—it’s time to Think Big-Grrr!  Why is it that we are always limiting ourselves?  We limit everything from our capabilities (what we can do) to our possibilities (who we can become).  Think about it.  If you thought you were capable of accomplishing so much more, that nothing could stop you, let alone stand in your way, wouldn’t you do a whole lot more with your life?  Wouldn’t you be a lot more?  Or are you truly happy with putting in your 40 hours at the J-O-B and kickin’ back weekends with your peeps, pallies, and posse?  Because if that’s enough for you—and there’s nothing wrong with that being your whole world—you haven’t quite grasped the concept of Thinking Big.  Grrr!

When you open up your mind to the possibilities of what you might could do if you really wanted to, if you knew what you could do and you went out and did it, then you might just conquer the world…or at least your neighborhood’s worth of it.  (And, if you were really full of “it,” you might even convince yourself that you could get away with a run on sentence or two like that last one.  FYI: I say do it—grammar be damned!)

Perhaps you have thought about it.  Even just a weensy bit.  Way back in the back alleys of your mind, where only your Some-Day-I’ll-Do-This Ideas and your I’ve-Still-Got-Plenty-of-Time Thoughts still run free in your Delusions-of-Grandeur Garden.  And maybe it scares you a little.  Not consciously.  Not really.  To tell others, and especially your Self, that you are not interested in being the best you possible is to admit that, in some way, you are lacking.  That you don’t think you deserve the best.  Or that you are too lazy to Just Do It!  And, that’s not acceptable, is it.  (Don’t answer that—it’s not a question, but a rhetorical statement we both already know the answer to.)

I think you’re beginning to understand why I put the “Grrr!” in “Think Big-Grrr!”  You should be pissed off.  At yourself, at me—either way, I don’t care—but, get mad damn it!  Then set out to prove me wrong.  Yeah, that’ll learn me!  I’m beginning to see snatches of my own greatness…but only for a moment, and then they’re gone.  I’m getting a little pissed off my damn self.  Grrr!

Now that you’ve determined you’re not all that happy with the life you’re handing yourself—yes, you’re responsible for the life you live, but that means you can do something about it any time you want—whatever shall you do?

Let’s face it, the problem here lies within.  You have a habit of getting in your own way.  Not just you—me, too.  Actually it’s kind of an epidemic really.  We all suffer Getting-In-Our-Own-Way-And-Tripping-Ourselves-Up-itis.  I say “suffer” and not “suffer from” because we put up with this affliction.  We endure it.  You’re not a victim here—none of us are.  You make your choices based on how much you really want to move forward…and what you’re willing to suffer for it.  Sometimes, especially when the desire to stay comfortable outweighs your yearning for greatness, it’s easier to cling to complacency and hold tight to a mediocre life.  Not always.  There are moments of accomplishment.  Bursts of growth and forward momentum.  Spasms of genius.  Just enough to keep you content at whatever level of awesome you’re currently occupying.  Complacency is a vile temptress.  Like the Sirens from Homer’s Odyssey, she lures you away from your potential greatness with a song, a dance, and a shake of her tantalizing hips—all this experienced via your fave TV shows, viewed from the edge of your oh-so comfy couch.  Yeah, Complacency’s a bitch alright.  And, yet we can’t seem to leave go of her, that couch, and those drama-juicy television stories.

The truth of the matter is you can.  The power to step forward into a fantastic life lies within you.  It always has and it always will!  Sure, you may have to baby step your way, one foot in front of the other at a time, but you’ll get there.  Just as long as you take those first steps and keep moving forward after that.  The hardest part about working out is getting into the gym.  It’s not the weights, heavy though they may be; it’s not your workload, full to bursting though it may be.  It’s your willingness to get up off your butt, off the couch, away from the computer, drive those strenuous 10-15 minutes to the gym, and walk your I’ve-got-so-much-more-other-stuff-to-do whiny ass through the door.  I know—I’m that guy, too!  And, as with you, the answer to this dilemma is up to me!

To sum up, the “Grrr” in Think Big-Grrr is the attitude you need to have when you find yourself settling for less.  I won’t say “less than you deserve” because, when you settle, you get what you deserve.  It works the other way around, too.  If you don’t settle.  If you think Bigger, Badder, Better, More—Outrageously even…if you’re willing to do that…and believe in yourself enough to put one foot in front of the other and persevere long enough, you will get exactly what you deserve.  And, by that time, you’ll have leveled up your life and grown into the type of person who deserves whatever they set their mind, heart, and hands to.  That’s what you’ll get for Thinking Big-Grrr!

Tags: comfort zone dream big empowerment get out of your own way goals mordant Mordant World mordantworld motivational moving forward r mordant mahon riki robinson success think big
« Down With O.P.P. (Other People’s Perceptions)?
How Bad Do You Want It!? ~Part the First~ »